From Obduction Wiki
Jump to: navigation, search
This article may need cleanup to meet quality standards.
Please help improve this if you can. The Discussion page may contain suggestions. 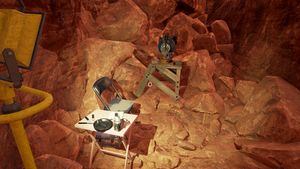 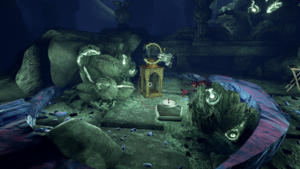 War rooms are found in two places in Obduction. They were used in the final plan enacted against the Mofang in the Mofang War. The war rooms were staffed by the Remainers, members of each race (except the Mofang) that stayed behind to enact the plan instead of taking refuge in a pod in Maray.

The one that successfully executed the plan was the war room in Kaptar. A single Arai beetle was stationed there. The simple command it carried out was to hover above the scale until that section was swapped to Soria. At that point it was just a matter of landing on the scale to swap that section back to Kaptar — and send the Mofang WMD back to Soria where it detonated.[1] The rooms have a chair and a table or desk, along with a seed-swap device to Soria.