From Obduction Wiki
(Redirected from The Tower)
Jump to: navigation, search
This article is a stub. You can help Obduction Wiki by expanding it. 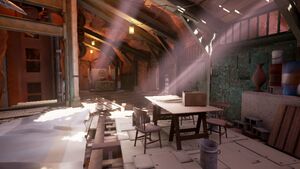 The Mayor's office. His desk is in the back of this picture. 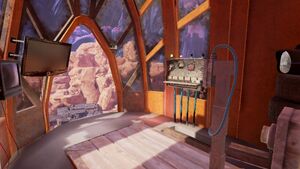 The Tower is one of the locations in Hunrath. The first floor is the Mayor's office, the basement is a bedroom and the control to remove the gate blocking access to the tree, and the top floor is an observation post, with a camera feed of the Gas Station, two television monitors, and a detonation device for the Bleeder. There is also a console that has lights for Soria/Mofang, Kaptar, Maray, and Hunrath, which light up when the corresponding Tree is connected.