From Obduction Wiki
(Redirected from Soria)
Jump to: navigation, search
This article is a stub. You can help Obduction Wiki by expanding it.

Soria, also called Mofang, is the Mofang homeworld in Obduction. 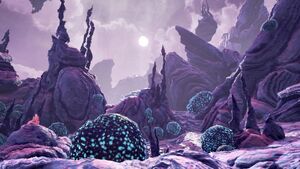 The planet is rocky, with many floating rocks around. The rocks are purple and fairly smooth/shiny. The rocks all have some patterns of lines on their surfaces. The foliage seems to be large dark blue spheres with bright blue spots, varying in size. You are able to see some small pillars that are red and flashing slightly, indicating that they were made by the Mofang. 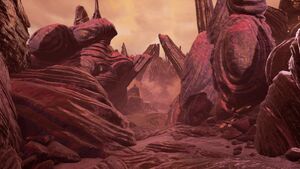 A view from a path in the cell with Ground Zero in the background.

Rocky like the planet, the rocks are very smooth and naturally have strange patterns on their surface. The surface is shiny and has a reddish/brown color as a result of the Mofang WMD explosion. The cell looks quite desolate, and there are clouds of unknown gases coming up from the surface. There are broken and crumbled pillars about, presumably Mofang structures. There are no large blue spheres like on the planet. 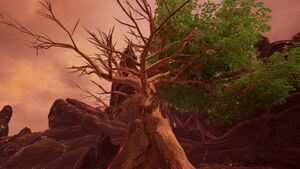 The half dead tree.

The Soria Tree is half dead and charred from the WMD explosion, but somehow the second half facing away from Ground Zero survived, despite the terrain of the cell past it also being dead.

You can see a road and buildings on Earth (in Arizona) from a cliff in the Soria cell.