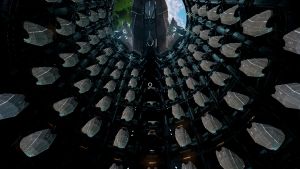 The Silo viewed from the bottom looking up.

The Silo is a Location in Maray. It holds the several hundred survivors of the Mofang War, taking quiet shelter in cryogenic pods in the huge silo. The Humans, Villein, Arai Polyarchs, and the friendly Mofang are here. The Remainers of each race stayed behind. There is an elevator down the center with a Villein panel that can be used to view individual pods, each with a specific number.

The remaining Villein guard, Trar, told you through panels to go to pod 222 and see the real mayor, Josef Pieter Jannsen, to show you that the mayor who talked to you earlier in Maray was a Mofang impersonator.

A full list of the survivors in the Silo can be found in the Maray manifest.