The power generator puzzle is the first puzzle the player must solve in Obduction. It consists of three main parts. 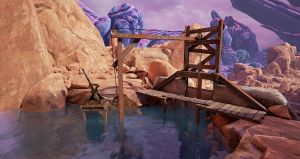 First, enter C.W.'s shack (the small building on the side of his yard) and use the left exit. Follow along to the waterfall and step onto the "elevator". Flip the switch to ascend. Exit the elevator and take the left fork; then, follow along the path and take the right fork. You will end up at a sluice gate with a lever nearby. Open the gate by moving the lever to the left. Return to the elevator and descend. Exit C.W.'s compound and head left. You'll encounter the swing bridge on the right. 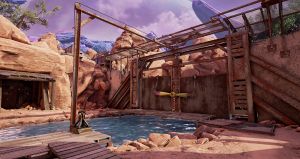 Push the right side of the propeller down. Go to the nearby lever and move it to the left. The gate will swing counterclockwise, allowing you to pass through to the other side. Continue through the Bosque and past the Sphere. You'll come upon the Trainyard on the right. 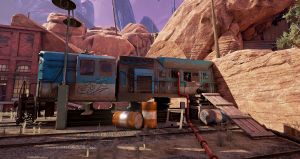 Walk up the planks and approach the blue locomotive. Flip the blinking switch to "ON" and move the red valve down. Turn around, descend the planks, and head to the Gas Station by following the red pipe and then the black hose. Wind the pump clockwise; then, return to the locomotive. Move the sliding door to the left. Hold the switch in the "PRIME" position until the glass is filled, the noise stops, and the indicator light turns yellow. Then hold the switch in the "START" position until the engine fully kicks in and the indicator light turns green.