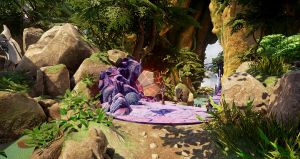 The WMD in Maray, closed.

Mofang WMDs (Weapon of Mass Destruction) are devices used by the Mofang in the Mofang War to destroy Worlds. They are warned about in a warning document found nailed to outside walls next to doors in Downtown Hunrath.

The weapons are dark red with bright red lines going through it, similar to other Mofang devices. It has several segments, but before opening it has 12 faces and its faces are pentagons. It floats above the ground. 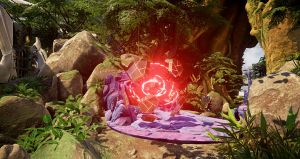 The WMD open, but not yet fully activated. 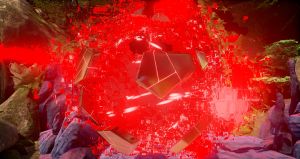 The WMD beginning to detonate.

The WMDs are activated by someone walking in a close proximity to it. Its segments then expand outward like the kiosks and then it starts exploding red/black clouds everywhere, then the device finally explodes and you can see the explosion spreading outward in a dome shape, and the screen goes white.

It was developed by the Mofang in the start of the Mofang War to destroy the other species. It seems as though there were only two, but three worlds/species to destroy. One is detonated before the main events of Obduction take place, when it was used against its own creators in Soria, which caused the cell to look so desolate and different from the planet you see outside Hunrath. The third WMD may still have been on Soria when the first one detonated, which destroyed it.

The other WMD was deployed in Maray, unknown at what time, but either failed or succeeded in its destructive plan based on what the player did. The Villein were ready for the weapon, but not the Mofang which was impersonating the mayor (IMayor). The Mofang was able to shoot one of the Villein guards (Aprar or Orbar, but the second, Trar, managed to force the Mofang away from the bomb and a standoff ensued until you arrived, at which point the Villein was able to shoot and kill the Mofang. Once the player got through the door after looking in the Silo for the real mayor, they are able to shoot the WMD with a Mofang disabler or walk close enough that it detonates and destroys Maray, the survivors, and the player.