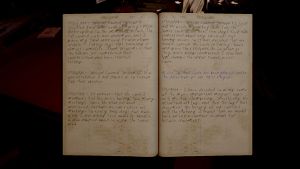 Mayor Janssen's journal is a document in Obduction. It is found on the mayor's desk in The Tower.

17125AH - Special Council Session 11: Discussed final approval of Farley's plan with regard to the imminent attack. The full council vote was unanimous, and I gave my final approval. Preparations update -- Farley says that tunneling is almost complete. Tham informs us that the Villeins just completed their construction and have started testing.

17126AH - Special Council Session 12: No one attended. I will inquire as to reason for their absence.

17127AH - It appears that the council members feel like we're having too many meetings. Since the plan has been approved, perhaps we can reduce our meetings to every two days for now. While I was asking Cecil about his absence I also inquired about securing the tower area.

17128AH - Special Council Session 13: Cecil will provide a new keycode for the lower lock in the next few days. Cecil was concerned about any survivors not having access, so it was decided that we would conceal the code in Farley's house and give the residents the location as they were being chambered. I also had him change the upper tower access code.

A clue to that code has been placed under the direction of our first Mayor.

17129AH - I have decided to bring some of the more important mayors' logs with me for chambering. Specifically the initial Hunrath log, and then the logs that document the history of our conflict with the Mofang. I would think we would have an extra chamber available for historic documents.

17130AH - Special Council Session 14: Only Tham attended. He informed me that, because of the dire circumstances, the others were either extremely busy, or not inclined to have long discussion about the situation. I told him I would suspend the regular Special Council Sessions, and we would simply meet as the need arose.

17131AH - I paid a visit to Farley today. I asked her to check on the availability of a chamber for the documents.

17135AH - I've spent the last few days collecting documents. I've divided them into two categories - Chambered and Vaulted. The Vaulted are less important, but obviously worth making an effort to save. They can be moved into Farley's vault area. The Vaulted category will also include any books that we've managed to collect through the years.

17137AH - With less than a week remaining before chambering begins, the population is tense. We've had several town hall meetings to try to answer any questions, but the realities of the current situation make it difficult to assuage fears.

17138AH - Farley has informed me that there is one final confirmation from Chavar. If Farley doesn't hear from her by the end of 17141AH then there is no turning back. There is an odd justice to Farley's plan in that whatever the Mofang bastards send to kill us, will be returned back to them.

17140AH - Special Council Session 15: A special meeting was called to go over the plans for the final time. Farley had several instruction sheets to distribute - the Mofang weapon illustration, a list of all Souls that will be used as a basis for the chambering manifest, and a thorough summary of the battle plans. These will be distributed as necessary. No word from Chavar.

17141AH - Farley tells me that there will be at least one chamber available for historic documents. Any other extra chambers will be loaded with emergency provisions and medications in case either Hunrath or Maray are completely destroyed. No word from Chavar.

17142AH - No word from Chavar. Death is on our doorstep. Curse the Mofang devils to hell!

17143AH - I am leaving to be chambered. This journal will remain here - to inform any future souls of what our last days were like.