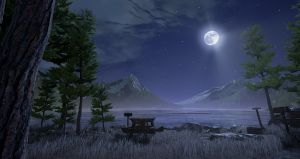 The Forest is the starting area of Obduction. It allows the player to become acquainted with the controls and serves as an introduction to the game. Its location on Earth is unknown, but it resembles Rocky Mountain forests in North America, a fact Robyn Miller used to name the song that originally played here before it was replaced. As the player travels down a linear path, the first part of Farley's group recording plays (albeit in a jumbled order), and a Collector Seed makes multiple appearances before swapping the player to Hunrath.