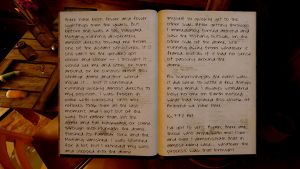 Farley's journal is a document in Obduction that is found in the vault under Farley's Community Center. She wrote in it periodically for a little over 3 years, right up until she went to get podded. Her inclusion of the term "years", as well as the use of a 12-hour clock ("3:15 am"), suggest that a Sorian day is closely—if not perfectly—aligned with an Earth day.

The Villein... they... I can't find the words. It's such a foreign life cycle... or perhaps not. They launch themselves across the expanses of space... preserved for eons, until at last their technological "arks" can hone in and carry them to a new home. They have no connection with their predecessors, but in spite of this (perhaps because of this) they have amazing recollections of their history. Their stories are epic - reaching back through the eons.

Unlike many of us who were abducted, they were abducted as a whole. Their "scoop" moved an entire facility that was about to be annihilated.

I have come to believe that they, perhaps more than any of us, have a deeper understanding of whatever this strange system is that we find ourselves in.

I need to write this down...

We buried Ji Eun today. This place never really agreed with her. Kept to herself mostly -- depressed and downcast. Anyway, I digress. I stayed after the brief words were spoken... I was the last to leave. I wandered to the dome (as I often do) and looked out at the undulating Sorian weirdness beyond the cell wall. Movement caught my eye. Now on very rare occasions we’ve seen Mofang scrambling about in the distance, but there have been fewer and fewer sightings over the years. But before me was a tall, haggard Mofang running desperately, almost directly toward me from one of the distant structures. It (I still can’t tell the gender) got closer and closer -- I thought it would see me and stop, or turn around, or be curious about this strange dome and our world inside it... but it continued running quickly almost directly to my position. I was frozen in place with curiosity, until my reflexes took over at the last moment, and I lept out of the way. But rather than hit the dome and fall backward, or come through into Hunrath, the dome flashed its familiar tone and the Mofang vanished. I was stunned for a bit, but I retrieved my wits and stepped into the dome myself to quickly get to the other side. After getting through I immediately turned around and saw the Mofang outside, on the other side of the dome, still running away from whatever it feared, but as if it had no sense of passing around the dome.

As surprising as the event was... it did serve to settle a few things in my mind. I always wondered how no one on Earth noticed what had replaced this chunk of Arizona we have here.

I've got to vent. Again, there are those who argue with me! Over and over I demonstrate that in almost every case... whatever the process was that brought us here -- it occurred at a pivotal moment. They tell their stories and they still can't admit that the abduction actually saved each of us -- all of us. What is it in human nature that grasps so strongly to the past, that we blame our saviors for stealing it from us?

And this... the arrivers come from various places AND times. Sarah got here almost 15 years ago from the year 2055, and Uzziel got here two and a half years ago from 1942!

What does that mean? Time here is shuffled and chaotic compared to Earth. What state is Earth in right now... WHEN is Earth right now?

It's 3:15 am and I feel compelled to journal this craziness. After spending most of yesterday meditating with the Arai -- and then most of this evening discussing the nature of these worlds with CW, I had just a sip of infamous Hunrath hooch and collapsed in my chair.

Well, I just awoke from a dream. I'm not one who puts a lot of credibility in dreams, but maybe the Arai were able to move something in me to understand... or possibly because of the intense discussion, my subconscious mind was triggered to be able to sort out some logical connections...

Or maybe it was the hooch

I was tending a garden - an immense garden. And it wasn't for food or flowers - it was just about the health of the garden. I kept working and working to control it and contain it, and make it healthier... but the garden seemed to fight me at every turn. And after what seemed like days of work I finally gave up in frustration - and as I stood there, doing nothing, the garden flourished before my eyes - growing and spreading in every direction.

Because (I realized), the system that the plants were based on was not about me shaping and controlling. The natural system of plants is healthier when they are out of control - when they are free to spread, and intermingle, and cross pollinate, and mutate.

Now, from a human point of view, that may not provide what I want. I get smaller fruit, and smaller flowers, and untidiness. But from the point of view of the plants, they grow stronger and much more resilient and resistant.

The more they are scattered the higher their odds of surviving.

And now that I contemplate, I realize that even the individual plants/seeds may not appreciate the benefit of what's happening. They are torn far from their origins, forced into situations that seem extreme -- possibly even destroyed by these new environments. But for the seeds that survive... ah... the seeds that survive. Now that's where real growth, strength, and abundance comes from.

It's so beautiful and terrifying. Beyond the beauty of it all is a system and structure that defies understanding.

Okay, what if this is all a natural process. There are signs of something behind it all, but well hidden signs. So... well... if I look at all of this; the cell, the tree, the water, the seeds, the hub, the health, even the abductions... well... there seems to be a grand system -- or plan.

The plan doesn't take "me" into account. It is un-emotionally intent on the health of something much bigger. That may hurt my feelings, but... well...

what am "I" in the entire scheme of the universe.

I have no idea what (if anything) might have put this process into motion, but that is irrelevant.

Tomorrow I will talk with C.W. He could be swayed from his “battery” plan.

I really don't journal much. I came to write this down because I am distraught. As I contemplate the plan that I have set in motion, I realize that I have become the destroyer of worlds. I sat down to write... to seek some cathartic tranquilization, and I realize the last thing I journaled was some esoterically beautiful philosophy about letting this garden grow. Not so reaffirming or calming.

But, nevertheless, here is my reasoning, because I must write this down.

Complexly... If this is some kind of garden, and we're the plants, or seeds, or whatever... well some of us have gotten together and decided that we're the better choice to survive... if the others have unilaterally decided that we all won't survive.

What gives one species the right to destroy another species? Who get's to choose? Do I just lay down and die because the more aggressive species thinks they're better, more powerful? What brutal scale do I use to measure the good of some against the life of others? Does love ever destroy... in order to help more survive... to help love itself to survive?

Does that even make sense? Can I kill because I think it will bring about more love? What if I'm not even capable of understanding the situation... of hate vs. love? Maybe I am the hater? Do I generate this "love" delusion to help me maintain my sanity in light of the choice I have made?

My God... it's too much... if these are just my walls of delusion... then I chose to live within them.

But I will not simply be trampled - I will kick and scream... and SURVIVE!

May God have mercy on my soul