Communication - Talking With Our Neighbors 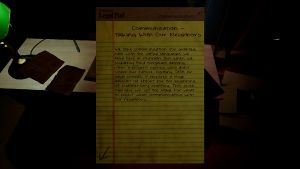 Communication - Talking With Our Neighbors is a document in Obduction. It is found in Farley's Community Center and explains how the inhabitants of Hunrath started to communicate with the Mofang, Villein, and Arai.

Communication - Talking With Our Neighbors

We take communication for granted, even with the varied languages we find here in Hunrath. But when we suddenly find ourselves among other intelligent species who don't share our culture, history, DNA, or vocal chords, it requires a huge amount of effort for the beginning of rudimentary chatting. This quick overview will set the stage for what to expect when communicating with our neighbors.

The Mofang were the first non-humans we met. With at least some level of similar physical vocal generating abilities, they picked up human words quickly. This early mimicry resulted in what the species became to be called. Even though they were able to mimic single words and simple phrases, it became evident over the years that huge grammatical differences were not easily overcome. Some have proposed that the difficulty may have arisen because the Mofang insisted on attempting to learn every human language, and as a result were never able to lock onto any consistent grammatical structure. Nevertheless, in spite of the rudimentary sentence construction, it has been very easy to communicate, and it has been unnecessary for us to learn their language beyond a few simple phrases and proper names.

The Villein have presented a particular communication challenge. From what we can gather, they produce sounds using two large reed-like structures inside opposite sides of their heads. The vibrations generated are channeled to resonance chambers in their skulls where they are combined into a complex, low frequency, dual tone. The low frequency, bi-tonal sounds are not only hard for humans to hear and resolve, but impossible for us to mimic. And the Villeins' hearing is also oriented toward low frequency, so they are unable to hear most of sounds associated with human speech. Therefore, communication with the Villein has relied on technology. They have adapted consoles (which the Villein fluently control with vocalization) for use by other species. Over the years, some individuals of other species (including a few humans) have learned to communicate very effectively using this method. Humans have been able to pick out some higher frequency characteristics of certain key Villein words over the years. And although we can't speak to them in a way that the Villeins can understand, we are occasionally able to hear and recognize these words when spoken distinctly by the Villein.

None of the stages of the Arai morphology have any vocalization apparatus. Because of the obvious synchronization of the "barnacle" flash and the ability of the "pawns" to provide for and address the needs of the Polyarchs, it was assumed that the species could communicate effectively. It was not until Farley began to spend large amounts of time in the Polyarch antechamber that the first clues to this communication became evident. After months of research, Farley began to have limited success with "receiving" some kind of simple "messages" that were coming from the Polyarchs. It is apparent now that the Polyarchs had been attempting to communicate the entire time, but they themselves had been experimenting with various "channels" until they finally got a response from Farley. After this breakthrough, others were able to "tune in" to the Polyarchs and learn to listen. Both the Polyarchs and the pawns have a simple organ that can sense human vocal frequency, enabling them to sense simple responses from humans, but over the years, Farley was able to learn to "speak" to the Polyarchs via a related form of extrasensory transmission.