From Obduction Wiki
Jump to: navigation, search
You can help us by uploading an image. here.
If the problems have been addressed, please edit this page and remove this notice. It will start with {{Upload and end with }}. 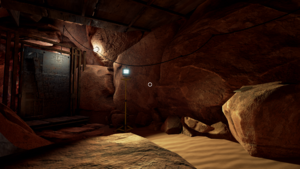 Location of C.W's Journal in the submarine cave

C.W.'s journal is a document in Obduction that is found in the submarine cave under the Waterfall. It was written by C.W. and consists of a single entry that identifies his wife and daughter back on Earth as Emma and Scarlett, respectively. It also clarifies the circumstance of his abduction: He was about to be hanged for an unknown reason. It is undated, but it must have been written within about ten years of the start of the game because the young girl he names, Claire, is still a child in her pod in Maray. The journal was added to Obduction for the PS4 release and, as of version 1.7.0, has now been added to the PC/Mac release.

I ain’t lying. I been hurting a bit. Farley suggested I might write some stuff down… that it might ease the pall. She said it’s helped others. I ain’t got a lot of hope for that, but I reckon I got nothing to lose.

I haven’t mentioned Emma to many folks around here. And she and Scarlett have been on my mind quite a bit. I’ve got a dull ache in the back of my brain that occasionally rings back there like a broken church bell. The thought of them resonates… but, I guess what grieves me is that the ringing is quieter. I’m forgetting… losing them. It’s been a long time.

I saw sweet Claire playing with a truck outside Farley’s a few days ago. It brung back memories of Scarlett, but I have a hard time picturing her face anymore.

It’s a sad thing, losing them we love. I suppose it’s a mixed blessing that the memories start to fade. At least the deep hurt goes away.

But it’s replaced by a dull longing - that bell that keeps ringing. And then there’s a guilt - a sorrowful guilt that creeps up and tells me I should be better at remembering. Sometimes, it’s hard to bear.

When I was brung here I was captured and about to be hung by the neck - so I suppose either way I never would have seen my wife and daughter again. That’s cold comfort.

This writing don’t help much. It dredges the hurt up. I think my work distracts me - I’ll stick with that. [[Category:C.W.]