From Obduction Wiki
(Redirected from C.W.'s Vault)
Jump to: navigation, search
This article is a stub. You can help Obduction Wiki by expanding it. 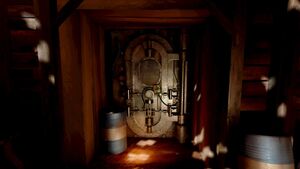 The exterior of C.W.'s Vault.

C.W.'s vault is where C.W. spends most of the game. He retreats to it when nobody returns to Hunrath after the Mofang War. The player interacts with C.W. almost exclusively in this location through the vault's window. C.W. leaves his vault multiple times during the course of the game, but the player never sees him outside it until the last scene.