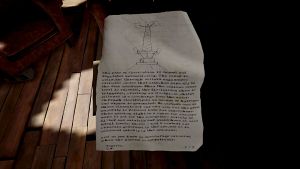 The Bleeder description is a document in Obduction. It was written by C.W. to Mayor Janssen to explain how the Bleeder functions.

At your behest, here is the information pertaining to the Bleeder, its history, and some of the engineering behind it.

The Bleeder project was designed and built at the request of Mayor Sims to collect and dissipate the ever-increasing power in the entire ecosystem. Mayor Sims was reluctant to allow the system to come to fruition as he (and others) had become suspicious of Mayor Farley's death. He believed that without knowing more precisely what would happen to the cell wall at fruition, it was ill-advised to allow it to possibly "open" -- thus allowing what might be outside - in, and what might be inside - out.

The system has the capacity to throttle all four connected worlds. The idea, as you are well aware, is to suppress the ecosystem power and thus inhibit full maturity of the Trees. It was postulated (and since became apparent) that this suppression will keep whatever unknown "maturity" process from happening -- and grant us direct control over Tree fruition.

The rate of dissipation is sensed and regulated automatically. The power is collected through Villein engineered extruded cables that attached directly to the dome membrane. When the maximum power level is exceeded, the dissipation phase is triggered, creating an electrical charge followed by a discharge into the water. Through electrolysis an amount of hydrogen and oxygen is generated. We capture some of these elements for our own use, but the great majority is released into our atmosphere. This gassing might be a cause for concern were it not for the ecosystem's ability to filter and maintain our atmosphere at near ideal levels. Excess H and O content and pressure generated by the process is re-balanced quickly by the membrane.

And as you know we discourage swimming when the Bleeder is operational.